In 1997, a highschool girl gave birth at her school prom.  She killed the baby, then went back to dance…

This is the story of Melissa Drexler.  ‘The Prom Mum’.

Melissa Drexler was 18 years old on June 6th, 1997.  It was the day of her school prom.  Melissa’s waters had broken that morning, and she had been suffering from severe cramps all day.  But nothing would stand in the way of Melissa having a fantastic time at her school prom.  After giving birth in the school toilets, she wrapped the baby up in a garbage bag and dumped them in the garbage.  She went straight back out to dance floor to enjoy her night. 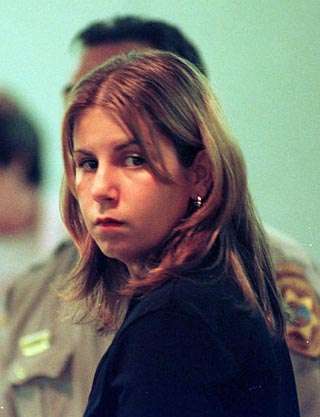 Melissa Drexler in Court.  Image Via The Billings Gazette

Melissa Drexler was born in 1978, the only child of a religious family.  Her father worked as a shipping clerk for an importing company and her mother worked in the local bank.  Melissa had a summer job at a retail store at the local beach.  She hung out with her boyfriend, liked club music and she wanted to be a fashion designer when she grew up.

Melissa attended ‘Lacey Township High School’ in New Jersey (United States). She became pregnant to her boyfriend, John Lewis, in late 1996 and kept her pregnancy a secret from both her boyfriend and her family.

A photograph of Melissa Drexler on the night of the prom.

The School Prom was held in the Aberdeen Township Banquet Hall on June 6th 1997. Melissa’s waters had broken the morning of the 6th and she had been experiencing labour pains all day. Melissa was well aware she was pregnant.  Soon after arriving at the prom, Melissa told her friends she felt ill and she went to the school bathroom. Other girls using the girls toilets at the time reported strange sounds coming from Melissa’s stall.  On enquiring if she was okay, Melissa told the girls…

‘I’ll be done pretty soon.  Go tell the boys we’ll be right out.’

Melissa gave birth soon after in that school bathroom. The baby was full term and weighed 2.7kg (6lbs).  Melissa lifted the baby up out of the toilet bowl and cut the umbilical cord using the serrated edge of a sanitary napkin dispenser.  She allegedly choked or smothered the baby to death, then wrapped the body in multiple garbage bags, and placed the baby into the bathroom garbage bin. She then went back to the dance, ate a salad and danced with her boyfriend.

Melissa had told no one about her pregnancy.

After Melissa had returned to the dance floor, there was evidence left in the bathroom that something was seriously wrong.  There was blood on the floor and on the toilet door.  A school janitor responded to complaints about blood in the bathroom and he went to clean up the mess.  When the janitor went to remove the garbage bag, he noticed the weight of the bag was unusual.  He found the newborn boy, unresponsive, and called for help.

Emergency workers spent over two hours trying to resuscitate baby ‘Christopher’. But he was gone.

Teachers who discovered the blood and then realised that a student of theirs had given birth, started to question the girls at the dance.  Many of the girls had told the teachers that Melissa had been in the toilets for a long time, and that there was blood in there afterwards.  Melissa initially told teachers she just had a very heavy menstrual flow, however soon after realising the baby’s body had been found, Melissa confessed that it was she who had given birth.

Melissa Drexler was arrested that night and charged with the murder of her baby boy. 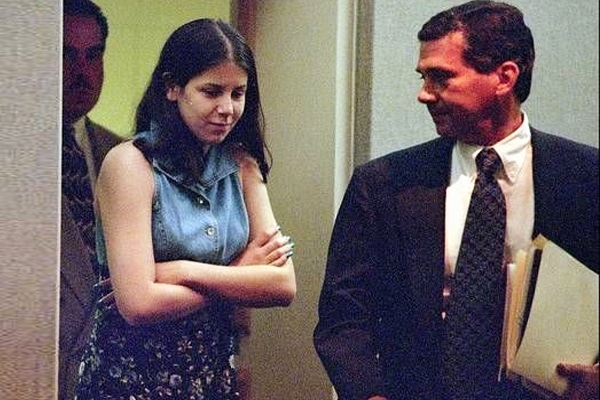 Melissa Drexler being escorted from court.  Image via Shesaid.com

Dr Jay Peacock was the Assistant County Medical Examiner at the time and conducted the autopsy on the newborn baby boy, ‘Christopher’.  Dr Peacock could not determine if the baby was alive or dead at the time he was placed into the garbage bag, however he was certain that the baby had been born alive.  Official findings called the death ‘asphyxia due to manual strangulation and obstruction of the external airway orifices.’

A separate autopsy was conducted by Forensic Pathologist Dr Michael Baden at the request of the Drexler family.  Dr Baden reported that:

‘The autopsy findings are ambiguous as to whether the baby was alive, because of all the resuscitation that was performed.  It’s a very difficult type of death to determine, whether a baby was born alive or not.’

As part of a plea agreement which bought her initial charge of murder down to aggravated manslaughter, Melissa pled guilty and was sentenced to fifteen years imprisonment.  She served only three years and one month before being released on parole at age 23.

A statement that Melissa made was read out in court:

“I knew I was pregnant.

I concealed the pregnancy from everyone.

On the morning of my prom, my water broke.

While I was in the car on the way to the prom, I began to have cramps.  I went to the prom, and I went into the bathroom and delivered the baby.  The baby was born alive.  I knowingly took the baby out of the toilet and wrapped a series of garbage bags around the baby.  I then placed the baby in another garbage bag, knotted it closed and threw it in the trash can.

I was aware of what I was doing at the time when I placed the baby into the bag.  And I was further aware that what I did would most certainly result in the death of the baby.”

“What motivates a mother to do something like this, I leave to the experts to debate, but the law is concerned that a very precious, helpless life has been taken.  The taking of every life demands accountability.

The victim here, only minutes old, has as much right to life as any of us.  Forgiveness should never displace responsibility and compassion should not displace accountability.

She (Drexler) is not a monster.  She is not someone to be gawked at, to be vilified by the public and the media.  She is entitled to our understanding, our compassion and our prayers.”

Only three days after Melissa committed this crime, the ‘No Early Release Act’ took effect.  Under this act, individuals who commit crimes of this nature will be required to serve 85% of their sentence. Melissa Drexler narrowly avoided spending a whole lot more time in jail.

On release from prison Melissa returned to live with her parents.  She is now a married woman with two children of her own. According to her social media accounts in 2016, she was ready to try for another baby.  She keeps a very low profile.

It pains me that young women can’t speak up about their pregnancies in their teens.

How to Make Bubble Gum

10 Phrases To Use To Write Emails Like A Boss