It’s normal to feel gassy whether you’re having a bad PMS or you’re actually pregnant. It’s because there is a hormonal surge that can slow down the activities in your gastrointestinal tract. However…

It’s PREGNANCY if…you cannot keep it to yourself because you don’t have the same control over your muscles during pregnancy.

Bloating also comes naturally when you have PMS because of fluid retention which results in a feeling of being full. However…

It’s PREGNANCY if…later in your pregnancy, your growing uterus crowds your abdominal cavity, thus, slowing digestion and pushing on your stomach, which will make you feel even more bloated after eating.

It’s PMS if… if you experience this dreaded cramps before your period. Others may even feel it during their period. Although, the pain goes away eventually by the end of your period.

It’s PREGNANCY if… you experience mild cramping early in the pregnancy. These cramps are the same as the one you get during your period, but it will usually be felt in the lower stomach or lower back and you can have the cramps for a long time — from weeks to months.

Both women who are having PMS and who are pregnant have mood swings. During this time of the month, women are on an emotional roller coaster ride where they find themselves crying one minute, and then laughing the next. However…

It’s PREGNANCY if…moodiness goes up at around six to 10 weeks, and slows down on the second trimester, and then reappears as their pregnancy ends.

It’s PMS if… the flow of your period is heavier and it lasts up to a week.

It’s PREGNANCY if… you will only have light vaginal bleeding or spotting, which usually appears in pink or dark brown. The spotting happens during the tenth or 14th day after conception and its days are shorter than a normal period.

It’s PMS if… you don’t actually feel this extremely.

It’s PREGNANCY if… you just want to lay down in bed for the whole day for no other reason except that you feel like you’ve had a tough day but you were just actually sitting in your office the whole day.

It’s PMS if… you shouldn’t be feeling this anytime during your period.

It’s PREGNANCY if… you suddenly feel nauseated and feel like vomiting, thus called, morning sickness. It is one of the clearest signs of pregnancy, but the American Pregnancy Association says it happens anytime of the day, not just in the morning.

It’s PMS if… you snap back to the normal you.

It’s PREGNANCY if… you still feel the symptoms way beyond your expected period. So, you might want to take a pregnancy test to see if it’s positive and go and see your doctor.

Have you figured out now if you are pregnant or just having PMS? 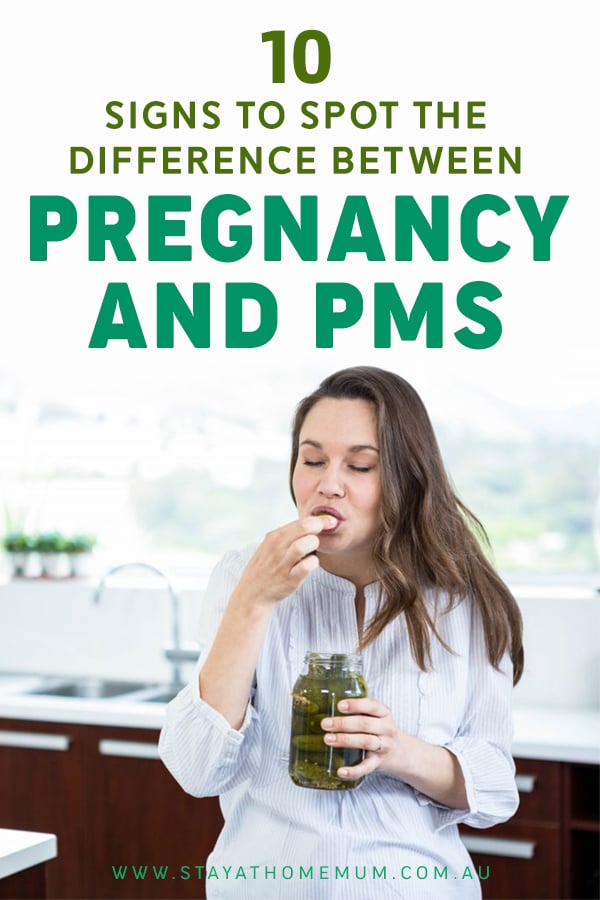